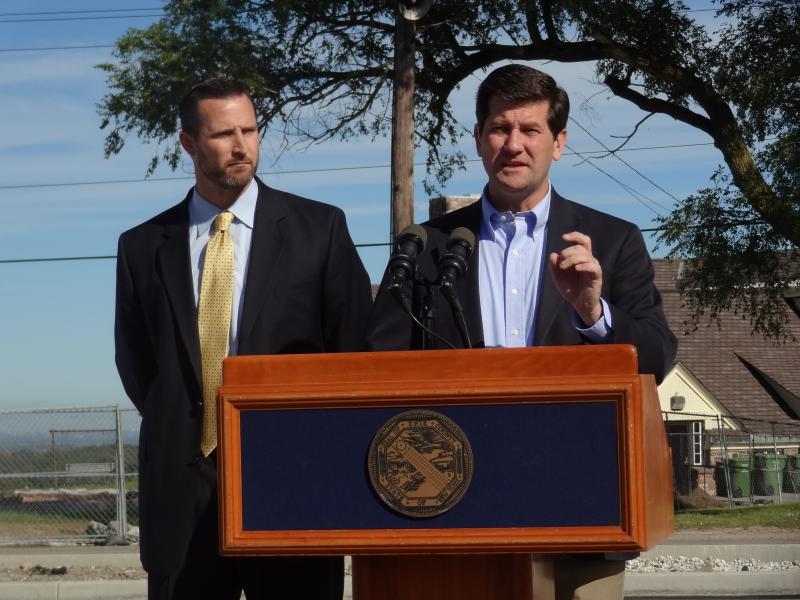 ERIE COUNTY, NY— Today, Erie County Executive Mark C. Poloncarz was joined by Commissioner of Parks, Recreation & Forestry Troy Schinzel, members of the County Department of Public Works, Erie County Legislator John Mills (R-11th District), and members of the Chestnut Ridge Park Conservancy at Chestnut Ridge Park to review the extensive amount of improvements and renovations done at Erie County parks, beaches, and golf courses in 2013, with significant work done at seven locations. Cooperation between the Parks and Highway departments once again in 2013 allowed for better use of resources and efficiency of operations in completing improvements. Total spending on Capital Projects in Erie County parks in 2012-2013 amounted to $4,482,667.00

“2013 has been another busy year for Capital Improvement projects at Erie County parks, beaches, and golf courses, and the improvements done this year build on the work that was accomplished in 2012,” said Poloncarz. “My administration has placed a high priority on improving and enhancing our county parks to give residents the natural spaces they deserve and expect. With our ongoing investments, we are fulfilling the promise I made to improve the conditions of these tremendous public assets, and I would like to thank the Parks and Highway departments for their dedication and cooperation in restoring our parks.”

Commissioner Schinzel added, “I am very proud of the amount of work and current systems we have in place to continually make the necessary improvements to the more than three hundred structures and many miles of roads & parking lots throughout the Erie County Parks system. We would not be as far along as we are without the cooperation and assistance of the Department of Public Works, along with the tremendous work of Parks staff on many of the locations we are talking about today. The commitment from the administration has been instrumental in allowing us to continually make these much-needed repairs to our shelters, buildings, comfort stations, bridges, roads, parking lots and more. While there is more work to do, the last two years are proof that we are headed in the right direction in our parks system.”

New roofs for Shelter #1 and for the Parkview Comfort Station were part of the improvements at Akron Falls Park in 2013, along with parking lot and road way improvements that replaced drainage inlets and repaired road surfaces. In 2012, Akron Falls Park began the complete replacement of the deteriorating Valley Bridge with an entirely new bridge structure, with work recently completed. Additionally, extensive repairs to the walkway to the falls, with new railings installed and the unsafe surface walkway patched and replaced where needed, was completed in 2012. Akron Falls Park was acquired by the Erie County Parks system in 1947.

Black Rock Canal Park continued its resurgence in 2013 with scheduled Phase II improvements including parking lot upgrades and amenities under design. The newest Erie County Park, which officially opened in May 2013, Black Rock Canal Park was a very busy spot this year as visitors flocked to the waterfront to enjoy the many “green” features of the park, spend time with their canine friends at the Dog Park, and enjoy unparalleled views of the Niagara River.

The site of extensive and ongoing improvements this year and jewel of the County parks system, the 1,213 acre-Chestnut Ridge Park saw Capital Projects in 2013 that touched on all aspects of the park. Leaky and rotting roofs were torn off and replaced on the Storage Building and Mechanic Shop. Roofs were also replaced on Shelters #25, #27, #27a, #28a, and #29a, all of which saw improvements to their concrete pads and parking areas as well. The Highway Department helped to facilitate repairs to roads throughout the park in Phase II of these continuing improvements. New guiderails were installed at all three entrances & exits from Rte. 277, replacing old, damaged rails. Improvements to the tennis courts will continue this year, with repairs and resurfacing, along with new hardware, for the eight courts not done in 2012. The parking lot at Chestnut Ridge also will see upgrades in accessibility, lighting, and other electrical areas this year. In 2012, four tennis courts were resurfaced and painted at the park, with new hardware, nets and posts installed, while Phase I of the parking lot and roadway improvements was begun in collaboration with the Highway Departments.

Acquired by Erie County in 1926, Como Lake Park was also a busy location throughout 2013. The stabilization of the popular Rich Marino Gazebo, the centerpiece shelter in the park, was completed along with replacement of the roofs for both the Gazebo and the cook shelter. Aged, leaking and rotted wood was removed from the roof of Shelter #1 and replaced with new roofing. Stabilization and necessary repairs are underway at Shelters #4 and #14, while the Como Lake casino is seeing the replacement of old, inefficient doors and windows with new ones. Lancaster Place continues to see improvements, with a new roof, carpentry work, all new windows and painting completed in 2013. As in other parks, Phase II of parking lot and roadway improvements continues apace at Como Lake Park, with paving and drainage improvements throughout the park. In 2012, the roof of the Carpentry Shop was replaced with improved rafter tails vinyl soffits and metal flashing installed. The roof of the Bowen Grove shelter was replaced, and new lights and amenities were installed. Phase I of parking lot & roadway improvements was also begun in 2012.

Golfers were able to see immediate improvements at the site of the 2013 Erie County Amateur Golf Championships, Elma Meadows Golf Course, in 2013. The clubhouse at Elma Meadows will see significant upgrades to its electrical service and power supply, as well as roadway and parking lot improvements to be completed in collaboration with the Highway department. Drainage, reconstruction of sand bunkers, and other course repair work was completed by Park staff. In 2012, significant renovations to Shelters #1 and #2 were completed at Elma Meadows and included new siding, fascia, electrical & plumbing repairs, and general carpentry throughout the structures.

Considered one of Erie County’s most unique parks, Emery Park also saw numerous improvements and enhancements in 2013. Stohrer’s Lodge received a new roof, as well as new windows and doors to replace old, inefficient ones. Both maintenance buildings at the park had leaky roofs replaced and new windows installed. The Million Dollar Comfort Station had extensive upgrades completed, including new plumbing, new roof, upgraded fixtures, masonry work, and painting. Replacement of the Emery culvert will start in October after age and condition issues warranted the full replacement of the culvert and only road to the Ski Lodge. The Emery Dam will be partially decommissioned for repairs, while several other structures including the Emery Inn are currently being evaluated for safety concerns & asbestos issues. Shelter #12, which had a tree fall on it in 2012 and was taken out of service, will be reborn as a new structure using the existing WPA-era stonework of the shelter.

Heavy hitters and duffers alike enjoyed the improvements at the Grover Cleveland Golf Course in 2013. The clubhouse was spruced up with a new roof and related carpentry work, while the pro shop also received a new roof, wood decking, carpentry & electrical work, and new soffits, fascia, & siding. The Maintenance building also got a new roof, siding & soffits.

Wendt Beach, dubbed “Erie County’s most romantic beach”, was the site for numerous improvements in 2012. Rotted siding on the maintenance building was replaced, gutters & leaders were installed on the structure along with a new commercial door, and the entire building was painted. Collaboration with the Highway department allowed for black top patching in many areas, while the entire parking lot and driveway into the park was oil & chipped. The historic mansion at Wendt beach is currently evaluated on its overall condition and possible future usage.