Joined by Erie County Commissioner of Social Services, Carol Dankert, while speaking in front of a “Pinwheel Garden” at the Edward A. Rath County Office Building, Poloncarz said “April is National Child Abuse Prevention Month, and it is important for all members of our community to not only recognize the seriousness of the problem but also to act to prevent it. Child abuse results in far-reaching consequences for its victims, with costs borne not only by the victims and their families but by society as well.” 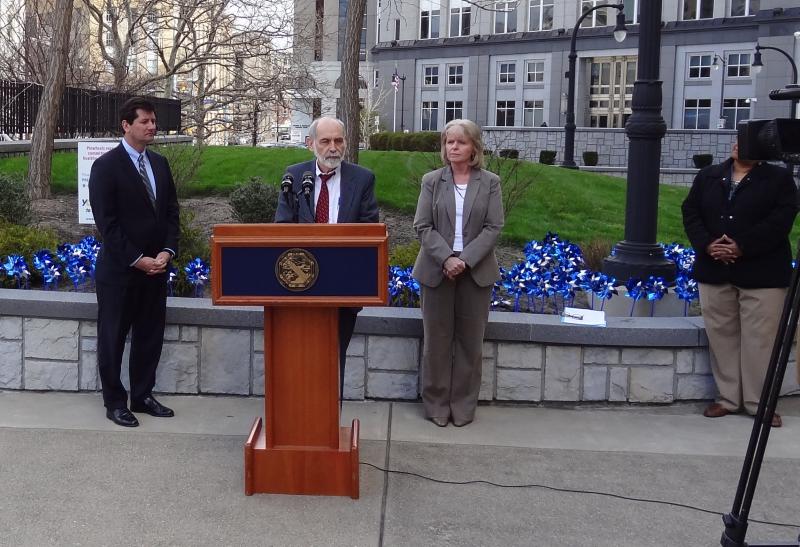 Pinwheels have come to symbolize a nationwide effort to change the way the public thinks about child abuse prevention. Nearly 900,000 pinwheels have been displayed across the country since 1998. [i] Educators, working to raise awareness of the issue by changing the focus to community activities, endorse public policies that deter abuse while giving families the tools they need to help themselves.  Around Erie County throughout April, branches of the Buffalo & Erie County Public Library will prominently display books about the topic, as well as provide parent resource sheets and posters aimed at raising awareness. Additionally, local agencies dealing with child abuse will sponsor a march to Buffalo City Hall on April 27th.

While child abuse and neglect are preventable, studies show that close to one million children are confirmed victims of maltreatment each year in the United States, and that a report of child abuse is made every ten seconds.[ii] Incidents of child abuse occur at every socioeconomic level as well as across ethnic and cultural lines; adverse effects for children’s development can include physical, emotional, social, and cognitive damage.

“Victims of child abuse are more likely to be in poor physical health, have difficulty forming emotional and social relationships, and are more likely to engage in high-risk behaviors as they grow into adolescence,” Poloncarz added. “Also, while there are real economic costs associated with child abuse, it is impossible to calculate the impact of the pain, suffering, and reduced quality of life that these victims experience.”

“There were 10,777 reports of child abuse and maltreatment received in Erie County in 2009; 11,564 in 2010; and 11,418 in 2011,” said Dankert. “But while statistics can paint a disturbing picture, they can also paint an encouraging one; for example, the number of children living in foster care in Erie County dropped to 800 at the end of 2011, which represents a 50% drop since 2003. Such remarkable progress is attributable not only to the hard work and dedication of all those involved in the public and private agency child welfare arena but also to everyone in our community that has made an effort to reach out and support struggling families. Erie County has a rich history of community activism to help those in need.”

The Erie County Department of Social Services provides a range of services for children, families and adults who may be in need of assistance. Child Protective Services, tasked with investigating reports of child abuse or neglect, can also help families obtain the services they need to keep children safe from harm. Assistance is also available from the Domestic Violence Unit, or Foster Care & Adoption, if needed. These services can be accessed through the Erie County website at   http://www2.erie.gov/socialservices/  or by calling (716)858-8000.