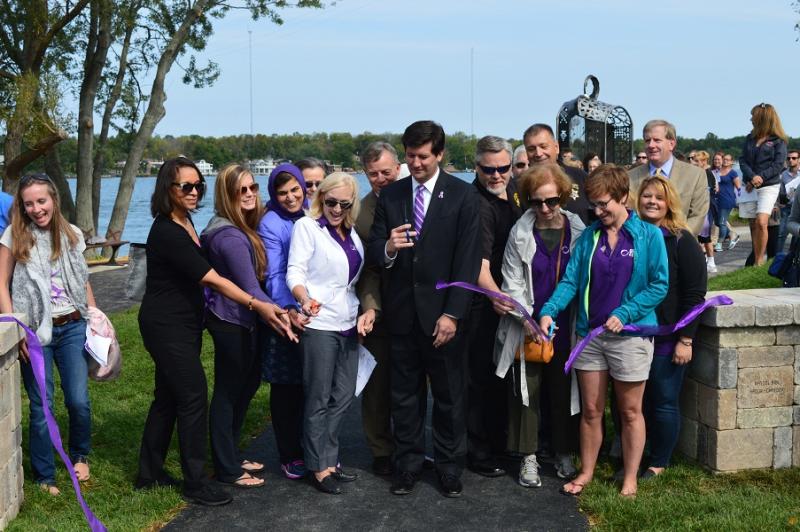 “For too long, domestic violence has hidden in the shadows of our households, neighborhoods and communities, destroying lives and scarring families in a seemingly endless cycle. With today’s ribbon cutting, Erie County and our partners are making an emphatic and unified statement that the cycle of violence can be broken, that there is hope and healing for survivors, and that our memories of the victims of domestic violence will always be alive here,” said Erie County Executive Mark C. Poloncarz. “We are strongest when we stand together, and today we are doing that and proclaiming to the world that we will cooperate as a community to eliminate domestic violence and bring healing and peace to those affected by it.”

Commissioner of Public Advocacy Sawrie Becker added, “The significance of holding an annual event and the impact of a permanent memorial to lives devastated by domestic violence will hopefully be a catalyst to prevent further violence. Silence is deafening and deadly. Awareness can make a difference in saving lives.”

The Tribute Garden is believed to be the first permanent Garden of its kind located on public land in the United States, and both the site itself and $50,000 in funding for completion of Phases I and II of the project were donated by Erie County. Earlier in this year, the Buffalo and Erie County Greenway Fund Standing Committee awarded the project nearly $200,000, which enabled the garden’s completion in time for the annual bike-a-thon and walk. The Buffalo and Erie County Standing Committee is funded by the New York Power Authority (NYPA) as part of a settlement agreement related to the 50-year federal operating license received by NYPA for the Niagara Power Project in 2007. Additional funding was secured by founding sponsors and generous private, corporate and individual donors who realize the importance of building awareness with a goal of saving lives and breaking the cycle of violence.

“The Tribute Garden is a welcome addition to the Greenway system of trails and parks along the Niagara River stretching from South Park in South Buffalo, to Lake Ontario,” said Buffalo and Erie County Standing Committee Chairman Alan Bozer.  “We are delighted with the quality of the work and recognize its significance to the community.”

The Parks department worked closely with landscape architect Joy Kuebler on the design and implementation for the Garden, which includes two walls of bricks and stones honoring or memorializing loved ones, an earth-berm amphitheater, bench settings and plantings. An intricate metal-forged trellis designed by sculptor Sarah Fonzi of the Foundry adds a visual focal point to the peaceful setting.

“The Parks department is honored to be a part of the Tribute Garden Project, and having the site of the Garden located in a county park highlights both the importance of the issue and the commitment Erie County has to eliminating it,” said Commissioner of Parks, Recreation and Forestry Troy P. Schinzel. “We were glad to work with our partners to create this unique and peaceful place that will always stand here at Isle View Park as a testament to that commitment.”

The ribbon cutting was preceded by the 6th Annual Break the Cycle Bike-a-Thon and Walk, which brought together cyclists and walkers to raise awareness of domestic violence. The ceremony also included a Native American blessing of the land that once belonged to them; a performance by NYC actress and domestic violence survivor Lisa Regina, whose monologues describe what domestic violence looks like and how survivors and families can heal; several poetry readings; and local domestic violence survivors claiming the Garden as a place to celebrate their hope and healing through the beauty and peace it offers.

Domestic violence has claimed the lives of victims locally and across the country. The National Institute of Justice and the Centers for Disease Control report that more than 1.5 million women – one out of every four – are physically assaulted by an intimate partner annually in the United States.  According to Erie County Central Police Services, over 11,580 calls reporting an act of domestic violence were answered in 2014. On any given day in 2014 in New York State, domestic violence hotlines answered 1,045 calls, averaging 43 per hour.

The women who guided the Garden from concept to reality:

On the Erie County Commission on the Status of Women, visit http://www2.erie.gov/csw/

On the Erie County Department of Parks, Recreation and Forestry, visit http://www2.erie.gov/parks/