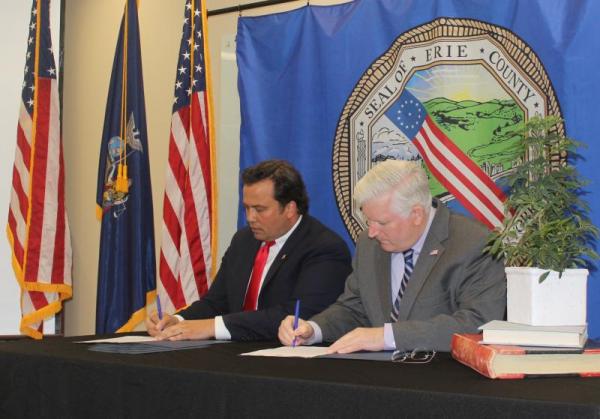 In a bipartisan effort, Erie County Comptroller Stefan I. Mychajliw Jr. (R-Hamburg) and Clerk Michael P. Kearns (D-Buffalo) announced the launch of an investigation into the negative consequences associated with granting illegal aliens the right to obtain a driver’s license in the State of New York. In a letter to Comptroller Mychajliw, Clerk Kearns requests the Comptroller’s Office release a report that outlines possible adverse effects if state leaders approve legislation granting that right.

“As the Comptroller of Erie County, I took an oath to uphold the constitution. On principle, I oppose any law allowing illegal aliens the right to obtain a driver’s license. It violates federal law. Giving licenses to illegals will have numerous and grave consequences for law enforcement and families.  State leaders are acting recklessly and irresponsibly. They clearly haven’t thought this through. The potential consequences of granting driver’s licenses to illegal immigrants are scary, especially for law enforcement.”

“I’m the son of Ukrainian and Polish immigrants. My family fled their Ukrainian farm during World War II. They came to America legally. My loved ones followed the rules. So too should any immigrant wanting to become an American citizen. I wholeheartedly support that. It is unconscionable for out-of-touch politicians to ignore federal immigration laws to give illegal immigrants a ‘breeder document’ like a driver’s license. It opens a Pandora’s Box that potentially puts law enforcement and families at risk. I will continue to fight these efforts on behalf of legal, law-abiding citizens,” said Comptroller Mychajliw.

Clerk Kearns, who is charged with overseeing operations of the Department of Motor Vehicles in Erie County, has voiced his opposition to NYS legalizing driver’s licenses for illegal aliens while raising concerns that such a law will have very real, negative consequences.

“Undocumented immigrants broke the law upon entering the United States, yet this bill provides them access to a driver's license. Immigration officials call this a ‘gateway document’ and fraud is a very real consequence. To guard against fraud, DMV employees will require training to identify documents from 195 countries around the world.  Even trained experts experience difficulty deciphering fraudulent documents. It’s unfair to expect auto bureau employees to do so. This bill comes with unintended consequences and the taxpayers need to be made aware through this report,” said Clerk Kearns.

Upon the conclusion of the Comptroller’s investigation, a final report will be released.

Comptroller Mychajliw and Clerk Kearns also announced that they sent a letter to Gov. Andrew Cuomo strongly requesting that he veto any law that would give illegals the right to a driver’s license.

“We are asking the Governor to veto or not sign any law that gives illegals the right to a driver’s license. Illegal aliens should not be protected. By definition they’re breaking the law by being here. However, because we have ill-advised leaders who appear ready to approve legislation, taxpayers here and across the state need to know the numerous negative consequences that will follow.  My report will detail those consequences and bring them to light as legal citizens have a right to know,” concluded Comptroller Mychajliw.

For a PDF of the letter from Clerk Kearns to Comptroller Mychajliw, please CLICK HERE.

For a PDF of the letter from Comptroller Mychajliw and Clerk Kearns to Gov. Cuomo, please CLICK HERE.