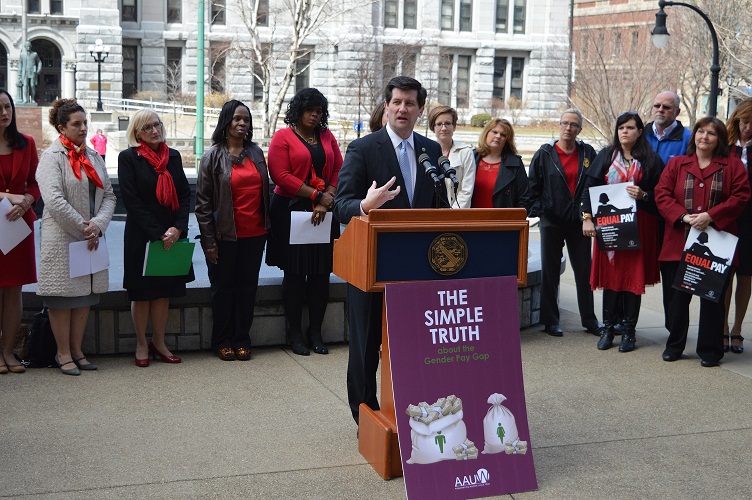 Erie County Executive Mark C. Poloncarz (at podium) joins Pay Equity advocates in renewing the call for equal pay for equal work. National Equal Pay Day is held in April each year to symbolize how far into the year women must work to earn the same amount of income their male counterparts earned in the year before; 52 years after the passage of the Equal Pay Act, women still make (on average) seventy-eight cents for every dollar made by a man for the same work. In 2014, Poloncarz signed an Executive Order mandating compliance with the Act for all vendors seeking business with Erie County, and the County Executive continues to pursue a similar policy at the ECIDA.

County Executive Joins EC Commission on the Status of Women, Partners in Renewing Call to End Pay Discrimination between Genders

ERIE COUNTY, NY— Today, Erie County Executive Mark C. Poloncarz was joined by Erie County Commissioner of Public Advocacy Sawrie Becker, U.S. Department of Labor Womens’ Bureau Regional Administrator Grace Protos, and representatives from the WNY Women’s Foundation, American Association of University Women, the Junior League of Buffalo, and the Women’s Business Center at Canisius College to draw attention to the issue of income inequality between genders. Today is National Equal Pay Day, a date that symbolizes how far into 2015 women must work to earn what men earned in 2014. Women who have experienced pay inequity in the workplace firsthand also attended to share their perspectives; on average, women still make seventy-eight cents for every dollar made by a man, a disparity that increases for women minorities.

“The Equal Pay Act was passed over 50 years ago to rectify this inequality, but unequal pay between the sexes is still a shameful reality today despite its being legally mandated. As long as this inequality exists, we must continue drawing attention to it and working to end it,” said Poloncarz. “Last year I signed an Executive Order mandating compliance with the Equal Pay Act for all vendors seeking business with Erie County, and am pursuing a similar course at the Erie County Industrial Development Agency. In 2015, it is unconscionable that women are still being paid a fraction of what men are for similar work. I commend Commissioner Becker and her partners for their ardent advocacy on this issue and am proud to stand with them in continuing the call for equal pay for equal work.”

Pay Equity Day was established in 1996 to shed light on the gender wage gap, and is held on a Tuesday in order to demonstrate how far into the week a woman must work in order to make the same pay that was earned by her male colleague the week before. In the City of Buffalo alone, if the average working woman were paid at the same rate as her male counterparts, she would be able to afford 102 more weeks of food (2 years’ worth), 11 more months of mortgage and utilities payments, 20 more months of rent, or more than 3,400 additional gallons of gas. Nationally, gender pay equity could grow America’s economy by as much as 9%, and if single mothers were paid comparably to men their poverty rates would be halved.

Commissioner Becker added, “The issue of Pay Equity can seem complicated, is often misunderstood and has many facets, however, pay equity is a reality and it deserves the attention and commitment of our community.  It is incumbent on each of us as citizens of this country to educate ourselves about the facts of pay equity, the impact that it has on women who make up 52% of the population of Erie County, and therefore its’ impact on families – the fabric of our community.”

U.S. Department of Labor Womens’ Bureau Regional Administrator Grace Protos said, “The work to end the pay gap must include addressing occupational segregation, making sure that women have equal points of entry into all jobs, are provided with the same opportunities for advancement as men and are afforded the training and education they need to go into higher paying jobs; we must change the work environment to one that reflects the working families of today by providing flexibility, paid leave, benefits and supports and we must put an end to discrimination such as pregnancy discrimination.”

“The WNY community has made some progress through the Executive Order signed by County Executive Poloncarz, and Erie County serves as a model to show how women can truly contribute to a robust and vibrant community when we advance their economic status,” said Sheri Scavone, Executive Director of  the WNY Women’s Foundation. “However, this progress should not be limited to Erie County. We need better policies across WNY.”

On the Erie County Commission on the Status of Women, visit http://www2.erie.gov/csw/