ERIE COUNTY, NY— Today, Erie County Executive Mark C. Poloncarz was joined by Deputy Commissioner of the Department of Environment & Planning (“DEP”) Thomas Hersey, Director of Operations of the Coca-Cola Bottling Company of Buffalo Pasquale “Pat” Greco, members of the Western New York Stormwater Coalition and the Erie County Water Quality Committee, concerned citizens, and the winning entrants in a rain barrel painting contest to highlight the importance of conserving rainwater that would otherwise run off a property. The contest, now in its second year, serves as an observation of Earth Day and as a demonstration of a practical way that individuals can make a positive environmental difference in their own lives. 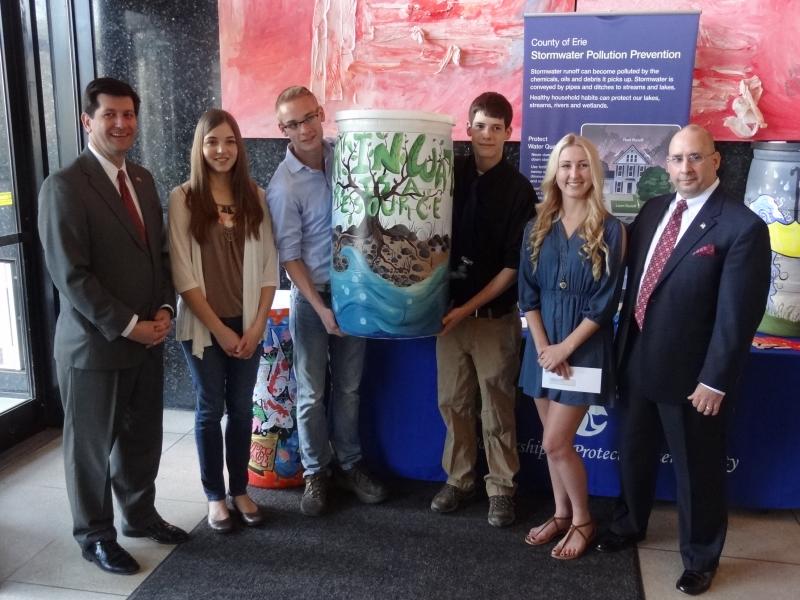 Twenty-five rain barrels were submitted for the 2014 Rain Barrel painting contest, representing entries from schools, clubs, and libraries throughout Erie and Niagara counties. The contest theme, “Rainwater is a Resource, Not Just Runoff”, challenged entrants to learn more about storm water pollution prevention and how it keeps pollutants out of our local waterways. Their colorful interpretations of that theme were painted on retrofitted syrup concentrate barrels provided by Coca-Cola Bottling Company of Buffalo. Entries were scored by DEP staff along with guest judges Robby Takac of the Goo Goo Dolls, Tod Kniazuk of the Arts Services Initiative of WNY, and Brittany DiLeo of the NYS Department of Environmental Conservation. Barrels were judged on creativity, neatness and execution of the idea, and how well they fit into the contest theme.

“Rain barrels are an excellent way to prevent storm water runoff and preserve a precious natural resource for better use, they are easy to put in place, and as we see they can be colorful and creative additions to anyone’s backyard,” said Poloncarz. “As I said in my Initiatives for a Smart Economy address, green infrastructure is critical in preventing pollution and protecting our environment.  I want to thank the Department of Environment & Planning, Coca-Cola Bottling, and their partners for their work in raising awareness on this issue, especially with the younger generation.”

DEP Deputy Commissioner Hersey added, “This contest provides a great opportunity for younger people to learn about the importance of conserving resources and preventing pollution, and lets them channel their creativity into the beautiful expressions you see on these rain barrels. The educational component of this contest is of the utmost importance, and we always welcome the opportunity to work with educators on environmental issues.”

Coca-Cola Bottling Company of Buffalo focuses on water stewardship through their “Live Positively” campaign, with investments in projects involving watershed protection and conservation taking precedence. By 2020, Coca-Cola intends to attain their goal of replenishing to nature and communities an amount of water equivalent to that used in their finished beverages.

“We congratulate the students for their fine winning artwork, and for lending their talents to this Live Positively Rain Barrel Art Contest,” said Pat Greco, Director of Operations for the Coca-Cola Bottling Company of Buffalo. “These rain barrels represent Coca-Cola’s commitment to water stewardship and, when all 25 rain barrels are placed, they will be capable of saving over 25,000 gallons of water annually. At Coca-Cola we are dedicated to making a positive difference around the world and especially here in Erie County, the community that we are privileged to share with you and call home.”

Prizes were awarded to the top barrels from Coca-Cola Bottling. The top finishers in the 2014 Rain Barrel contest are:

Storm water is rain and snow melt that flows over hard, impervious surfaces like roof tops, driveways, streets, and parking lots.  Along the way, contaminants such as lawn chemicals, automotive fluids, pet waste, and litter are collected. These pollutants end up in our waterways each time it rains.

A key to preventing storm water pollution is to utilize green infrastructure solutions. Green infrastructure is a collection of practices that capture runoff and allow it to infiltrate the soil as nature intended.  One easy and important green infrastructure practice is storing rainwater for re-use by using a rain barrel. Other methods include planting rain gardens to naturally soak up and filter the runoff, or simply disconnecting gutter downspouts from your home.  Using these practices, thousands of gallons of storm runoff can be reduced, keeping pollutants out of our rivers, streams and lakes.

To learn more about the rain barrel contest and to view the entries, visit http://www2.erie.gov/environment/index.php?q=rain-barrel-contest

On the Erie County Department of Environment & Planning, visit    http://www2.erie.gov/environment/