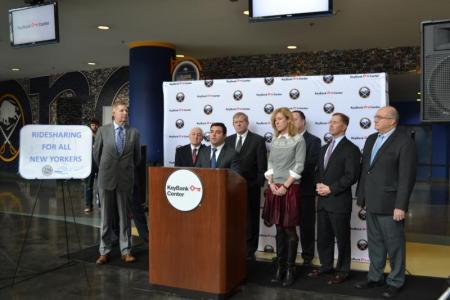 The Erie County Legislature and Visit Buffalo Niagara (VBN) announced today a $100,000 commitment in the legislative fight to finally bring ridesharing services, such as Uber and Lyft, to Buffalo and all of Upstate New York. Initiated by the Legislature’s Majority Caucus, funding has been designated in the 2017 Erie County budget for VBN to create a campaign advocating New York State leaders end the delay and approve ridesharing legislation.

“It is absurd that Upstate New York doesn’t have ridesharing. Whenever there is a major event in Erie County, we are inundated with comments from visitors who are shocked that we don’t have this basic service that is available all across the world. We must bring ridesharing to all of New York State, not just New York City.  The benefits it brings are immeasurable, not the least of which is lower alcohol-related traffic accidents,” said Majority Leader Joseph Lorigo, who has been a strong advocate for ridesharing. “Since the proposal has stalled in our state legislature, I felt it necessary that our Erie County Legislature Majority Caucus prioritize funding to help in any way possible. Lots of people talk about bringing ridesharing to Buffalo, but the time has come for action.  I am proud to show a true financial commitment to finally achieving this goal.”

VBN has already been on the forefront of this issue, working with various organizations to advocate for ridesharing in Buffalo, noting the positive impact that companies like Uber and Lyft have had in cities around the world.  As Buffalo and Erie County’s tourism industry continues to grow and expand, ridesharing provides convenient and affordable transportation to keep visitors moving.

“Buffalo is undergoing a once-in-a-lifetime transformation as a visitor destination. Tourists exploring our restored architecture, revitalized waterfront and thriving arts scene expect ridesharing will be available when they arrive here and are often disappointed in its absence,” said Visit Buffalo Niagara President and CEO Patrick Kaler said. “We are very appreciative that the Legislature recognizes ridesharing as a necessary visitor amenity in Buffalo and look forward to working on the county’s behalf to help make it a reality.”

The Legislature will vote this afternoon on the proposal where the measure is expected to pass with unanimous support.

“This is a great partnership that I expect will have a positive impact in the effort to legalize ridesharing in Upstate New York. This delay has gone on far too long, and continues to baffles visitors and residents who can’t take advantage of ridesharing, which is a convenient, safe and affordable transportation option,” said Legislator Edward Rath, who also serves on the Visit Buffalo Niagara Board of Directors.

“Erie County continues to work hard to bring ridesharing to our great city. Not only will ridesharing provide employment opportunities for many, the service has proven to reduce DWI rates. It also serves rural areas that don’t have affordable access to taxis or reliable public transportation. Ridesharing is extremely popular across the world, including New York City, now it is time for all of New York State to be granted access to this service,” said Legislator Ted Morton.

“During the many large-scale events that have recently come to KeyBank Center and HarborCenter, the biggest complaint we’ve received is the lack of ridesharing,” said Michael Gilbert, Buffalo Sabres vice president of administration and general manager of HarborCenter. “Despite our new facilities and the resurgence of surrounding development, the absence of ridesharing puts Buffalo at a disadvantage on the national and international stages. As we prepare to host hundreds of thousands of visitors for the 2018 World Junior Hockey Championship, we are extremely hopeful that New York State will permit this practice and allow visitors to enjoy the entirety of our region with safe and simple travel.”

“Buffalo is largest city in the nation without access to ridesharing services,” said Buffalo Niagara Partnership President & CEO Dottie Gallagher-Cohen.  “In today’s economy, that is simply unacceptable.  For over a year, the Partnership has been a part of a growing coalition working to bring ridesharing to all of New York State.  We have and will continue to push our state leaders to support a regulatory framework necessary to allow ridesharing services to operate in Buffalo Niagara and all across Upstate.  The Partnership looks forward to working with VBN, Erie County, the Buffalo Sabres and all other allies to accomplish this priority during the 2017 State Legislature session.”

According to Uber, 1.5 million people in upstate New York have their app and an estimated 43,000 attempted to use the app on Thanksgiving Eve alone. Uber is legal in over 500 cities and 47 states in the U.S. and over 77 countries across the world.