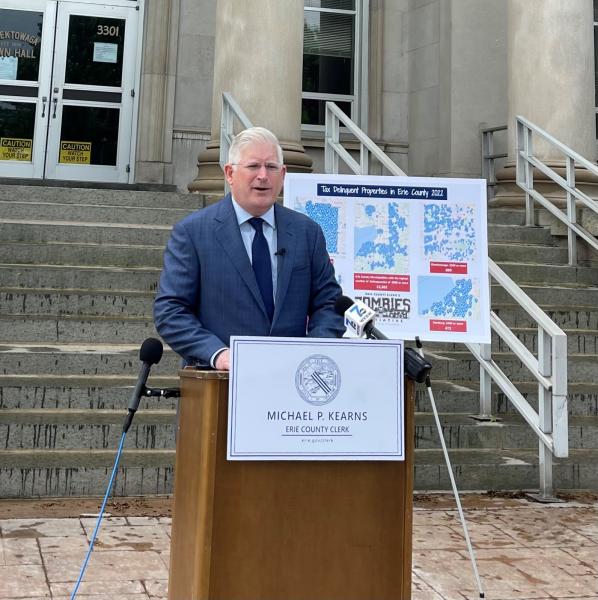 Erie County Clerk Mickey Kearns advocates for Cheektowaga homeowners who are seeking reconsideration of their property tax assessments outside of Cheektowaga Town Hall. Kearns delivered a letter to Supervisor Diane Benczkowski and Town Board Members asking them to suspend the reassessment process at the next Board Meeting.

In a letter delivered to Supervisor Diane Benczkowski and the Town Board, Kearns called on them to suspend the reassessments at their upcoming Board meeting on Tuesday, May 24th, pending further collection of data to allow residents to fully understand and possibly challenge any changes. Currently, homeowners only have until May 25th to file grievance paperwork, and the town has announced that as the day it will also be holding hearings on those filed objections.

Kearns said, “Upon consultation with counsel, the Town can take steps to suspend the update pending further data collection. Assessments have been suspended for a similar reason before in municipalities across Erie County, including Cheektowaga.”

Cheektowaga’s residents, and especially its senior population, stand to be greatly impacted by this update to the assessment roll.  Given the short time frame to appeal a determination, Kearns, Benczkowski, and Jasinski agree it is unfair to expect residents to quickly gather the information to challenge new assessments.

“A government of the people, for the people and by the people values transparency, honesty and fairness,” said Cheektowaga Councilmember Michael Jasinski. “This process, from the start, exhibits none of those. This is the very reason I ran for Town Board, to challenge these kinds of antics.”

The increased valuations amount to tens of thousands of dollars on many properties. Kearns feels the contractor assisting the Town had plenty of time to prepare assessments and that homeowners should be afforded a similar opportunity.  “The actual tax impact on residents could be significant, and, in some cases, insurmountable, leading to further tax delinquency or foreclosure,” stated Kearns.

The Erie County Clerk ZOMBIE Initiative recently released a report regarding tax delinquency in Erie County. It revealed that after the City of Buffalo, Cheektowaga had the second most delinquencies in property taxes in excess of $500, at 899 properties. With hard-working Cheektowaga homeowners facing potentially higher tax bill resulting from assessments, Kearns is concerned this number may increase.

A copy of the 2022 Tax Delinquency Report can be found at erie.gov/clerk/TaxDeliquencyReport.