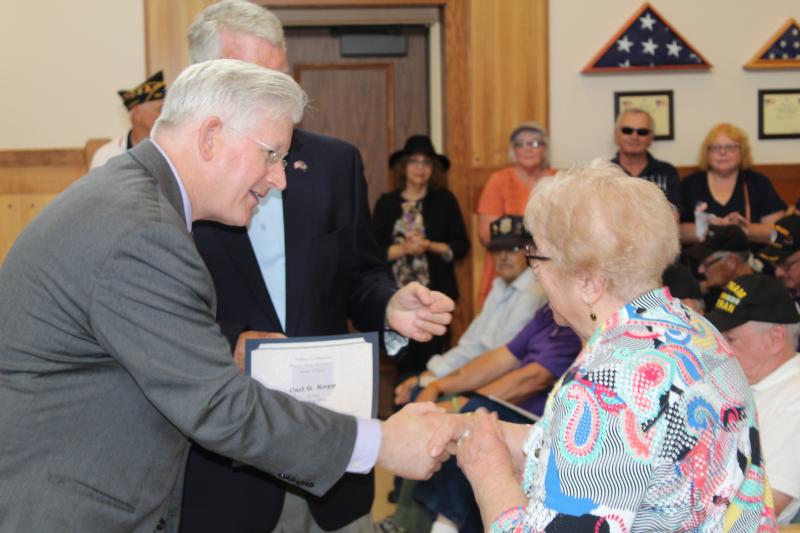 Family members of Purple Heart Veterans received certificate on behalf of loved ones.

“I think it is important to honor the brave men and women who have served and sacrificed for our country. They deserve to be recognized and I am happy we are able to keep a record of our local heroes at the Erie County Clerk’s Office”, said Kearns.  Erie County Clerk Michael Kearns initiated the William J. Donovan Purple Heart Book of Merit last year and plans to add to the book each year with new recipients. Anyone who wishes to be added to the book or would like to add a deceased loved one, should fill out a form created by the Clerk’s Office and submit a copy of one’s discharge papers. A ceremony will be head each year on or around Purple Heart Day.

This year’s ceremony was held at Elma Town Hall with Supervisor Dennis Powers. In support of the ceremony and the Military Order of the Purple Heart, Supervisor Powers issued a proclamation naming the week of August 7th “Purple Heart Week”. During this week, the Town of Elma will be the first designated town hall in Erie County to fly the Purple Heart Flag. This year was also special because a Purple Heart Parking Space was officially designated in order to show support for Erie County’s wounded warriors.

“The Town of Elma is honored to be asked to host the Purple Heart Ceremony. Those men and women we honor today are “true heroes” in the true sense of the word. These brave men and women who fought, served and sacrificed will be forever honored in history. Thank you to Erie County Clerk Mickey Kearns for allowing Elma, the center of Erie County, to host this prestigious event, the only Erie County Municipal building to fly the Purple Heart Flag,” said Supervisor Dennis Powers.

The ceremony began with a welcome from Supervisor Powers and Clerk Kearns, followed by an introduction from Jim Schaller, adjutant to the Military Order of the Purple Heart. The Purple Heart Flag was raised, and the National Anthem played before veterans followed Mark O’Brien into the court room for the invocation. Volunteer veteran supporters lined up on either side of the walkway and cheered with waving flags as the veterans passed by.

Corporal Mark O’Brien was this year’s Keynote Speaker at the event. He is an Iroquois Central High School graduate, Marilla Native, and Iraq Military War Veteran. While serving with the Marine Corps, O’Brien was shot with a rocket-propelled grenade (RPG) while involved in a firefight in Iraq, resulting in the amputation of his right arm and leg.

West Seneca American Legion Post 735 began the indoor portion of the ceremony with the Presentation of the Colors and everyone stood to say the Pledge of Allegiance. Before the invocation began, the room took a moment of silence as Taps played for all deceased Purple Heart Recipients and those who never made it back while fighting for our freedom. The ceremony concluded with God Bless America.

Kearns was happy to share his project with Niagara County who began their Purple Heart Book of Merit this year. He encourages all County Clerk’s to keep record of their county’s Purple Heart Recipients and Honor them on Purple Heart Day.

The William J. Donovan Purple Heart Recipients Book of Merit will continue to be on display at the Clerk’s Office, at 92 Franklin Street. Along with the book, there are also historical photos of William Donovan, a portrait of Donovan, and a World War I era Purple Heart with two oak leaf clusters donated to the Clerk’s Office. The 2018 and 2019 volume will be on display year round. Submissions for the 2020 Book of Merit are currently being accepted and added to the record. The 2020 Book of Merit will be unveiled on National Purple Heart Day, August 7, 2020.