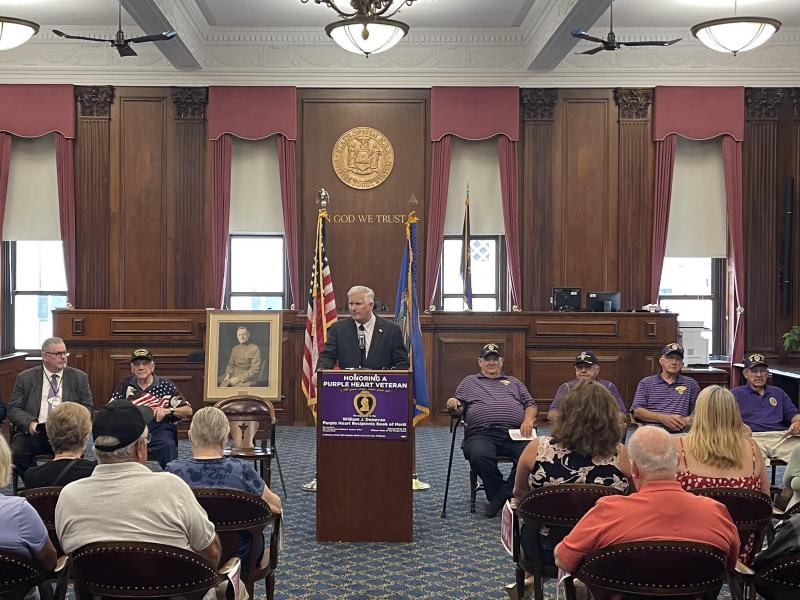 Erie County Clerk Michael P. Kearns pays tribute to the 2022 Purple Heart Recipients being added to the William J. Donovan Purple Heart Book of Merit that is kept on permanent display in the Erie County Clerk's Office during a Dedication and Flag Raising Ceremony that included honorees, family members, area veterans, and the Military Order of the Purple Heart, Chapters 187 and 264.

“An estimated 1.8 million service men and women who fought and lost their lives or received life-altering injury protecting our great country and have earned the Purple Heart,” stated Kearns. “These selfless individuals come from all walks of life and backgrounds, and more specifically, from all across Erie County. While the majority of veterans do not seek our thanks and praise, I firmly believe we owe them both.”

National Purple Heart Day is observed August 7th of each year and dedicated to remembering and honoring the brave men and women of the United States Armed Forces who were wounded on the battlefield or lost their lives ought in combat operations.

This year’s ceremony was held at Old County Hall, home to the Erie County Clerk’s Office, in the Ceremonial Court Room, followed by a Purple Heart flag raising observance at the statue of President George Washington. The ceremony began with a welcome from County Clerk Kearns, followed by the Pledge of Allegiance led by World War II Veteran Dr. John Long, and the National Anthem was performed by local lyricist George Miller. Kearns presented Certificates of Recognition and Purple Heart pins to recipients or their family members as the honoree’s names, branch of service, and war was read aloud.

The William J. Donovan Purple Heart Recipients Book of Merit will be on permanent display at the Erie County Clerk’s Office inside Old County Hall at 92 Franklin Street. Along with the book, there are also historical photos of William Donovan, a portrait of Donovan, and a World War I era Purple Heart with two oak leaf clusters donated to the Clerk’s Office. Submissions for the 2023 Purple Heart Recipients Book of Merit are currently being accepted online at erie.gov/clerk/purpleheartform or by contacting the County Clerk’s office at 716-858-6787.

“I believe it is important we pay tribute to our military heroes who were injured or killed in the line of duty, then bestowed this national honor. They deserve to be recognized for their service and sacrifice and I am happy we are able to keep such record of our local service men and women at the Erie County Clerk’s Office,” added Kearns.

Additionally, Old County Hall will be lit up purple, August 5-14th, in honor of Purple Heart Appreciation Day and in solemn recognition for all service members injured or killed in action.