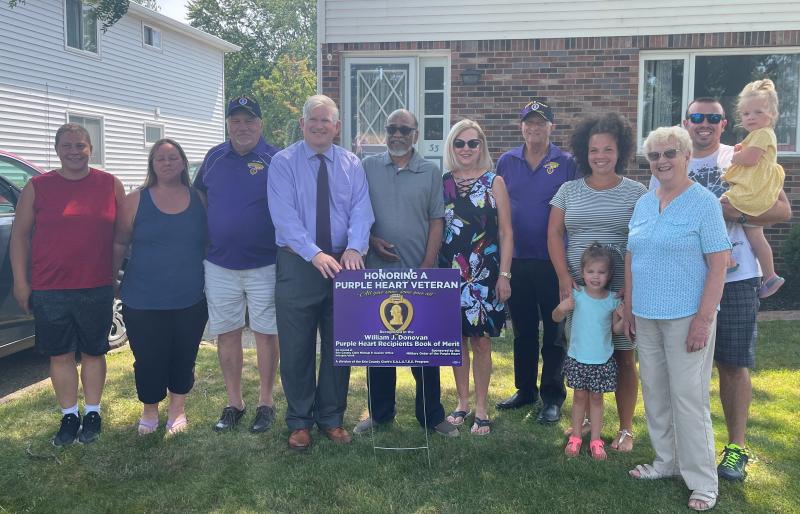 Erie County Clerk Kearns presented a Certificate of Recognition, a commemorative Purple Heart pin and special Purple Heart lawn sign to U.S. Army and Vietnam War Michael E. Haynes of Lackawanna, NY during a special "at home" presentation honoring servicemembers who received the Purple Heart and whose names were added to the 2021 edition of the William J. Donovan Purple Heart Recipients Book of Merit. Also pictured are Mr. Haynes' wife, Debbie and his entire family, along with Jim Schaller and Russ Ward of the Military Order of the Purple Heart, Chapter 187.

Due to COVID-19, not all veterans or family members could attend this year’s ceremony held in front Old County Hall, home to the Erie County Clerk’s Office. Therefore, Clerk Kearns presented Certificates of Recognition, commemorative Purple Heart pins and a special Purple Heart signs publicizing that a veteran or member of that household is a recipient of a Purple Heart and had given their life or had been wounded in combat during special “at home” ceremonies with veterans and their family members.

National Purple Heart Day is observed August 7th of each year and dedicated to remembering and honoring the brave men and women of the United States Armed Forces who were wounded on the battlefield or lost their lives ought in combat operations. In addition to the Purple Heart Day Ceremony held downtown, Kearns performed a number of "at home" ceremonies across Erie County in Elma, West Seneca, Lackawanna, and Glenwood.

“An estimated 1.8 million Americans have earned that venerable award, however commemoration of those who earned the Purple Heart have been eclipsed by COVID-19,” stated Kearns. “This is just one more reason for all of us to take time to honor and thank the many service men and women who fought and lost their lives or received life-altering injury protecting our great country.”

The book is named after Buffalo native and leading advocate for the Central Intelligence Agency, William J. Donovan. Donovan would receive three Purple Hearts during his service in the military, and would go on to heard the predecessor of the CIA, during World War II.

The William J. Donovan Purple Heart Recipients Book of Merit will be on permanent display at the Erie County Clerk’s Office inside Old County Hall at 92 Franklin Street. Along with the book, there are also historical photos of William Donovan, a portrait of Donovan, and a World War I era Purple Heart with two oak leaf clusters donated to the Clerk’s Office. Submissions for the 2022 Purple Heart Recipients Book of Merit are currently being accepted online at erie.gov/clerk/purpleheartform or by contacting the County Clerk’s office at 716-858-6787.

“I think it is important to honor the brave men and women who have served and sacrificed for our country. They deserve to be recognized and I am happy we are able to keep a record of our local heroes at the Erie County Clerk’s Office,” added Kearns.