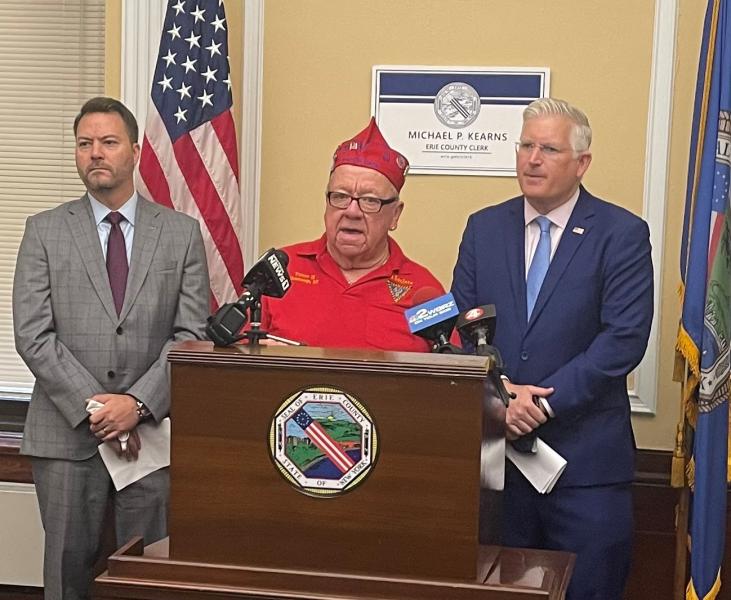 Erie County, NY- Erie County Clerk Michael P. Kearns has fielded a number of complaints from area veterans who have been unable to utilize New York State’s Excelsior Pass to provide quick access to their vaccination status because they were vaccinated through the Veterans Administration (VA) WNY Healthcare System.

When veterans go to join in New York State’s immunization database, Excelsior Pass registrants who utilized a federal immunization site are being rejected due to fragmented system of federal, state and local laws, regulations and policies poses problems for both intra- and interstate exchange of immunization information.

Last week, County Clerk Kearns sent a letter to Governor Kathy Hochul asking her administration to work with the New York State Legislature to quickly pass legislation to remedy this issue, so veterans and their family members can present official vaccination status as the Excelsior Pass intended.

“In the state’s rush to offer a digital app designed to enable someone to confirm their vaccination status, they have alienated a large segment of the community, our veterans,” said Erie County Clerk Michael P. Kearns. “The Buffalo VA did a commendable job getting thousands in the veteran community and their families vaccinated. Unfortunately, those required by mandates to validate their vaccination status are now hindered by state and federal laws which need to be immediately revised.”

While Kearns understands the Veterans Affairs Office of Congressional and Legislative Affairs has submitted a request to both the House and Senate Committees on Veterans Affairs seeking legislative relief, he has enlisted assistance from New York State Senate Minority Leader Rob Ortt, who is a veteran of the Army National Guard where he served in Operation Enduring freedom in Afghanistan. “We should not ‘stand down’ to let New York State’s military veterans wait for Federal government action,” added Kearns.

The VA faces federal and state policy challenges that disallow their data from being transmitted to New York State. The VA is prohibited by federal law from transmitting veteran information to New York State according to 38 U.S.C. § 5701. The policy prohibits the disclosure of a veteran’s health information, including name and address, to State/Jurisdictional Public Health Authorities for disease and immunization reporting unless explicitly mandated by State law. At this time, New York State currently does not have any standing laws explicitly requiring reporting of adult vaccinations.

“As we see more and more private entities encouraged by state and federal governments to implement vaccination requirements, it is paramount that New York State and the federal government get on the same page when it comes to vaccination documentation,” said Senator Ortt. “Our veterans who have been vaccinated, by choice or because they have been mandated as a condition of employment, should have easily available access to their status just like every other resident of our state, yet government bureaucracy is blocking them from doing so.”

Kearns understands that not everyone agrees with the requirement of a vaccine pass. However, he hopes that New York State moves to quickly to resolve this road block so veterans have proper access to the Excelsior Pass system. “The fact remains this precondition has become a reality for many folks in New York State, from entering a Buffalo Bills game to attending a Broadway show,” stated Kearns. “Our veterans should not be denied the ability to utilize New York State’s Excelsior Pass solely because they sought the comfort of vaccination from their trusted medical provider. We need to continue supporting our veterans at every opportunity.”